After the control of the armed group on the Nineveh province on 10/6/2014 this lead to displacement of hundreds of thousands of families to the areas of the outskirts of Mosul, and the three provinces of Kurdistan region, And what worsened the conditions of the displaced families is the control of armed group on Tal Afar on 17/6/2014 , where more than 170 000 families displaced to Sinjar district as a result of the brutality of the armed group and the indiscriminate killing of women, children and men.the district crowded with displaced which reached to more than 800 000 displaced noting that the area of ​​the district is (2928) square Km and the number of the people (340) thousand population of various nationalities (Arabs , Kurds , Yezidis , Turkmen , Shabikiya , and Christian) the district also 126 square kilometers away from the center of the province of Nineveh . the displacement causing considerable pressure on the district , especially after the continuing waves of migration from different regions of Mosul to the district after being the most secure place as a result of domination of armed group on Mosul, on both sides left and right.

IRCS is the first humanitarian organizations in helping the displaced families in terms of providing food , relief items , baby milk , the distribution of more than 650 000 hot meal , and more than 20 000 meal of dry meal (breakfast, lunch, and dinner) a day for the displaced families as well as providing cooking gas , ice blocks , furnaces and several tons of flour to provide bread for the displaced families. the number of beneficiaries of food and relief aid reached to more than 800 000 displaced people. IRCS according to data and fast developments of the events has transferred in coordination with several parties families to the central and southern governorates as being safer areas and has already transferred hundreds of thousands of families to Baghdad and the southern and central provinces by road, where it rented buses and transfer families by road to the southern and Central provinces as well as transferring some families by air through Irbil airport , and the fact that this procedure reduce the tragedy of reality of armed group domination on Sinjar area, Where armed group dominated Sinjar on 08/02/2014 so people displace via two routes the first through Zammar – Zakho and the second by Sinjar Mountain , which the families besieged there by the armed group whom kill men, women and children by bombing the mountain as well as the captured women and sold as captive ( most of them from Yazidis nationalism ) . 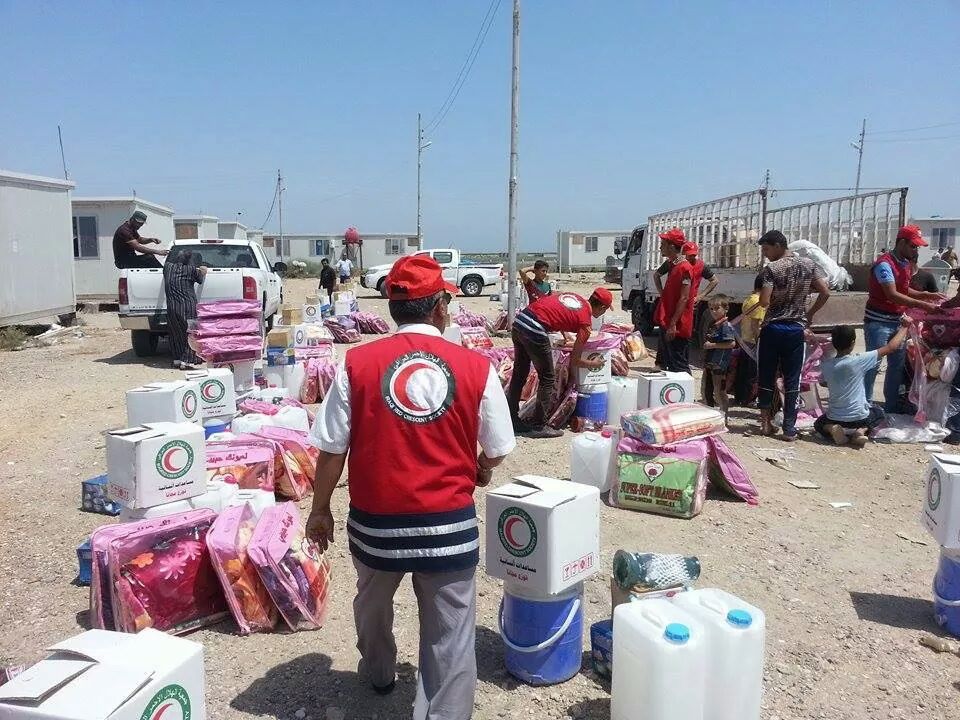 IRCS launched calls by its spokesman Assistant Secretary General Mohammed Al –khoza’e for necessity to respect human rights and appealing at the same time the local and international organizations to intervene to stop these serious violations which committed against civilians, women, children and men by armed gangs. IRCS intervenes rapidly and sending by air ( by the use of aircraft of the Iraqi army ) more than 50 tons of food parcels to besieged families in Sinjar Mountain , which is estimated 3 500 displaced people , these aircraft throwing food aid and baby milk, water and first aid kit to besieged families , IRCS also made international appeals to help besieged families in Sinjar Mountain , where several international organizations send more humanitarian aid to those families.

Iraqi Red Crescent Society : humanitarian situation in north Iraq is becoming increasingly difficult as a result of the flow of hundreds of thousands of displaced people and the growing their needs