At the gates of Kurdistan region-Iraq,hundreds of families are waiting for their role to obtain the approval of the regional authorities in Kurdistan enter in to one of the region’s governorates the scene which is repeated daily since the events of Mosul,and so far, hundreds of children and women are looking for shielding that protect them from sun until nightfall, where they are forced to sleep on the ground in the hope of last morning in which they may get the approval and the opportunity to get to safety, or to add another day of suffering during the waiting in the heat of the sun and the situation consequents of thirst and hunger, No thinking of getting back, as the images of violence and killing is still damp in their memories and the language of bullets is the higher sounds right now in cities which seemed empty from life and the sounds of birds.the Iraqi Red Crescent Society’s seeking to help these families to access to the provinces of the region and moving them from other provinces as the IRCS volunteers distribute drinking water and food to alleviate their suffering since the tenth of June till now.The violence has forced thousands of families to flee in Mosul , Salah Al-Din religion and Kirkuk, where thousands of families forced to flee from their homes and resort to safe cities. 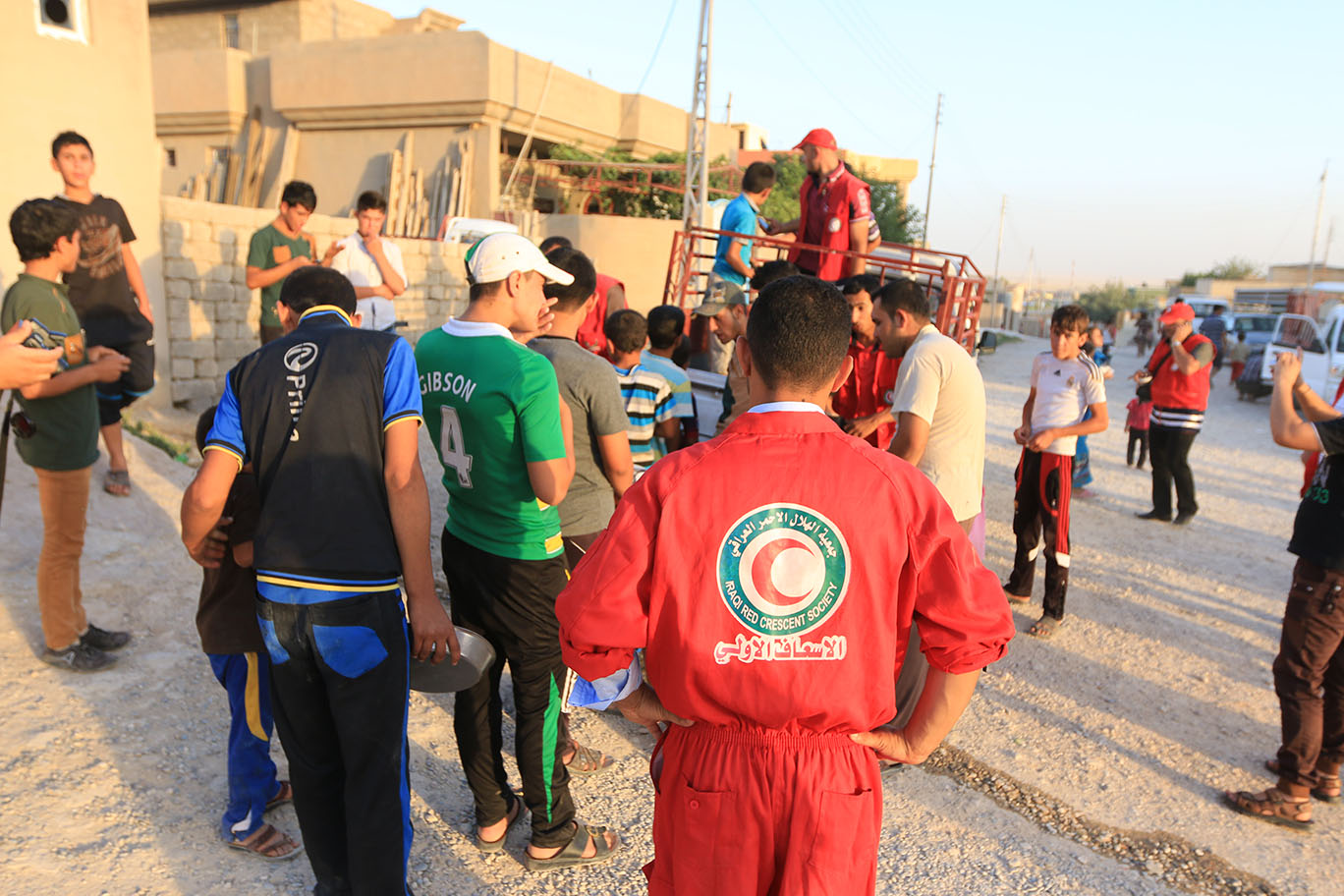 According to the teams the Iraqi RC, (87 203) family including (434 251) displaced in less than a month and that the exodus is still going on till now, most of the displaced people distributed within the province of Kurdistan and the outskirts of Nineveh,in which the number of displaced people in Dahuk arrived (36 165) family while in Erbil (30545) and in,Sulaymaniyah (3000) family,but in the outskirts of Nineveh(in the city of Sinjar , Hamdaniya , Bartalah and Ba’shiqah (8700) family and in Kirkuk (3544) family , Diyala (2500) family. On other hand the southern governorates witness  flow for a number of families like Najaf (658) family, Karbala (800) family,Babylon (280) family, Qadisiyah (140) families , Wasit (137) families , Missan (60) family and Samawah (24) family.
during the escalating of needs of displaced people and the difficulty of their humanitarian and psychological situation,The Iraqi Red Crescent response to their needs and helping them also, IRCS lunch, daily,more than(52000) food meal and provide drinking water to more than (130500) people, as the total beneficiaries of the services provided by the Iraqi Red Crescent since the beginning of the events and till now are (160 842) displaced while Iraqi RC is still working in all the areas where the presence of displaced people, Mr.Mohammed Alkhozai/the Assistant Secretary General of the Iraqi Red Crescent said“the situations that the displaced had formed momentum in the various humanitarian needs and they live in a difficult humane situations meanwhile the Iraqi RC mocked all their resources to help the displaced people to provide the most important requirements(food and shelter)”.Adding that“the volunteers of Iraqi RC making more efforts in order to help these families and to provide them with the thinks which they need as well as helping them by the psychological and social adapting during the current situations”.
Iraqi RC has been able to evacuate large number of families from Sinjar to safer places.

Iraqi Red Crescent: The number of displaced People has been increased to more than 86 thousand families since the beginning of the events so far

IRCS : number of displaced families reached to more than (90) thousand family till now.

IRCS : number of displaced families reached to more than (90) thousand family till now.