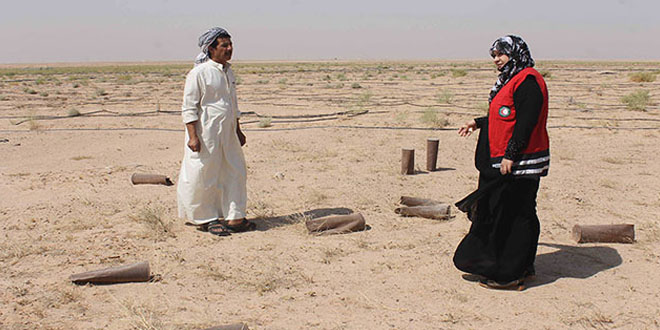 The Iraqi Red Crescent Society/Najaf branch found large quantities of war remnants in the area of (Al-Hezam Al-Alakhthar) in the governorate as this area had radioactive contamination and considered like an area of minefield, while these remnants has been founded based on information provided by one of the citizens who lived in the region. The branch staff contacted immediately and informs the Directorate of Civil Defense in Najaf in order to remove these remnants and to get rid of it.

For his part, Kufa’s office/Najaf branch held awareness of war remnants activity in Najaf Technical College that included lectures in this regard and its impact on the lives of citizens and environment, and how to avoid them and to report about it, while this activity had the valuation of professors and teaching staff at the college praised on the efforts carried out by the Iraqi RC to raise awareness of war remnants to reduce the risk of them in which folders and posters for awareness had distributed to number of beneficiaries who were (77) person.