IRCS : More than 2000 family displace from Tel a’fer to Sinjar

in Events in pictures, Humanitarian aid to the displaced families, News, Photographic Reports
A A
Share on FacebookShare on Twitter 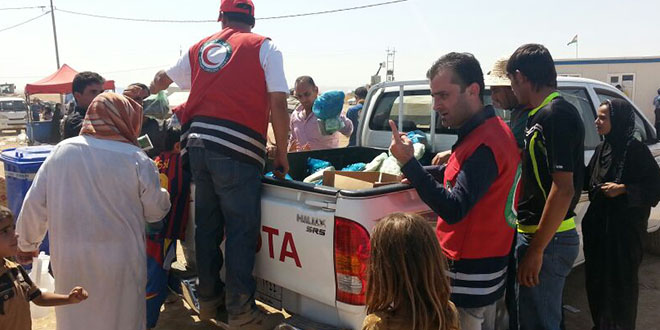 the assistant secretary general Mohammed Al-Kuza’e also commented on this by saying ‘’ that IRCS teams have registered the entry of 400 displaced from Mousl to Irbil , Dohuk ,Sinjar , and Hamadiniya , pointing out that 150 displaced entered Dohuk and distributed in several areas of it like ( Aqra , Shykhan , Zakho ) after they get the permission of authorities there to enter . adding ‘’ that other 150 entered Irbil and distributed in several areas of it and other 100 displaced in Hamadiniya and 50 displaced to Sinjar, pointing out ‘’ that IRCS has erected camp in Irbil consisted 200 tent to dwell more than 1200 displaced . Al-Kuza’e also clarifying ‘’ that IRCS teams distributed more than 100 food meals and more than 2000 food and relief parcels to help the displaced people ‘’ .