IRCS has implemented several health activities and campaigns in Al-Najaf 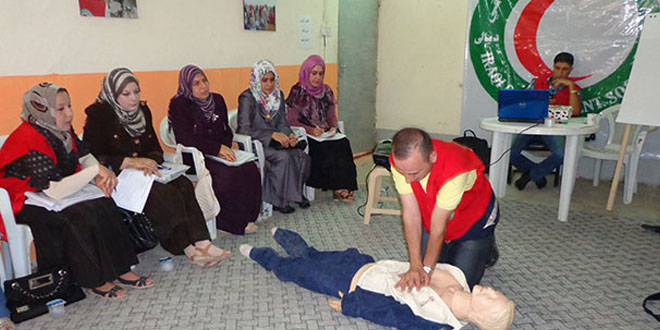 IRCS / Al-Najaf branch has implemented several health campaigns in order to aware people from communicable and cancerous diseases in Al-Najaf governorate .The branch has formed a team from the branch volunteers whom implemented field visits to Shuma’ Al-Ghad , Naft Al-Waset club , Al-Ataba Al-Alwiya , and Dar al-Dawlah for orphans as well as to hold womanly group in Kufa branch . Health awareness lectures (from the risk of communicable and cancerous diseases , its symptoms , and the ways to avoid them ) have been delivered during the field visits (the number of beneficiaries is more than 150 ) . The team also organized health courses to female employees of branch on the early detection of breast cancers , self and periodic examination in order to spread awareness to detect it early and reduced it effects . on the other hand Kufa bureau organized a workshop on cholera disease in bureau place in Kufa district by the participation of number of volunteers and employees of the bureau , the workshop included lectures on the necessity of treatment of cholera before its spread as well as to symptoms of vaccines of cholera . The bureau staff implemented other field visits to raise awareness of cholera risk in Al-Barikiya and Al-Najaf airport ( the number of beneficiaries more than 150 ) . There are other activities implemented by Al-Najaf branch / Manathera bureau which is training course on the psychological support to state employees and civil community organizations in Manathera district , the course included lectures on how to provide psychological support , the ways to communicate persons affected by trauma , violence and natural disasters victims in addition to induction lectures on theInternational Movement of Red Crescent and the humanitarian role of IRCS in support the most vulnerable community segments .The Mshkhab bureau also implemented first aid course to the state employees and civil community organizations , the course included practical and theoretical lectures on the first aid principles , the ways of aiding the emergency cases , CBR training , and injured transportation .