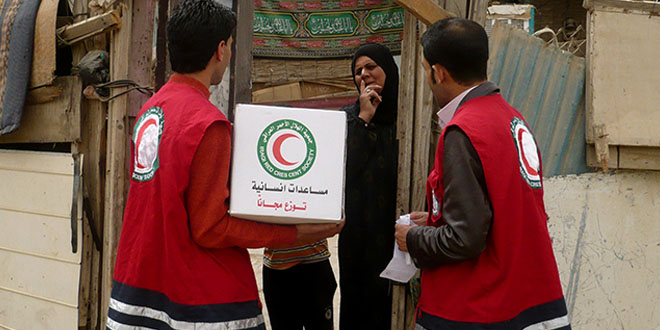 The Iraqi Red Crescent Society distributes food assistance to the needy families in the Hay Al-Resala area-Maysan governorate. As a working group team was formed so as to distribute 80 food parcels to the registered families in the first survey which conducted before the distribution for poor families.
The cadre of the branch also carried out first aid workshop to the volunteers that included theoretical and practical lectures regarding the principles of first aid, then certificates distributed to the participants while the number of beneficiaries were (21) volunteers, in addition to organize a session of psychosocial support for the volunteers at the branch in which (15) volunteers included some lectures of psychosocial support in the disaster, anger and domestic violence.

The cadre of the branch participated in awareness workshop from remnants of war that held by the General Directorate of Physical Education/Environmental Education, and School Health Department at Maisan governorate included lectures about awareness of war remnants in the presence of number of educational supervisors from the central and southern governorates and representatives of environmental and civil defense. The cadre of the branch opened photo exhibition which represent the activities and programs of Iraqi RC at awareness of war remnants.
For his part, the cadre participated (installing first aid detachment in order to provide first aid to the players when accidents or injuries occures) in the Championship of Iraqi clubs Muay Tai (Tai Boxing) that hosted by Youth and Sport Directorate in the Garden of Eden Resort’s participation branch

IRCS distributes food and relief assistance to the students in the College of Basic Education and inspects needy families, widows and orphans in the some areas of Baghdad

IRCS distributes food and relief assistance to the students in the College of Basic Education and inspects needy families, widows and orphans in the some areas of Baghdad