On the Occasion of martyrdom anniversary of Imam Ali Bin Abi Taleb , IRCS has erected 32 Tents provided with medical requirements and first aid in Al-Najaf governorate. 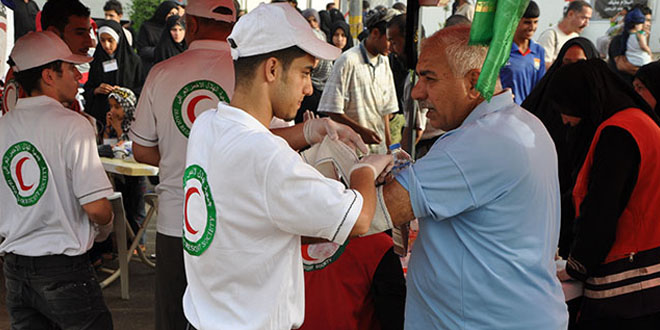 Iraqi Red Crescent Society has erected 32 Tents provided with medical requirements and first aid on the occasion of Imam Ali martyrdom anniversary in Al- Najaf . Mr. Mohammed Al-Khuza’e / Assistant Secretary general of IRCS said “ 32 tents provided with medical requirements , first aid , and mineral water and with more than 150 employee and volunteer working for two days to present medical requirements and services in addition to the measure of pressure and diabetes and the distribution of clear water to visitors of Imam Ali shrine ( on the Occasion of martyrdom anniversary ) , he also added , “ that IRCS formed four portable medical detachments distributed in the roads which leading to the holy shrine , the fist one of Najaf branch ( at The Islamic university in Al- Imam Ali street ) , the second one of Manathira bureau ( located near Al-Rasol Al- Aadam street which leading to holy shrine , the third one of Al- Mashkhab bureau ( located in Al- Madina street ) , the fourth one of Al-Kufa bureau ( located near Al-Kufa mosque ) . It must be mentioned that IRCS made annual plans in advance for such occasions.