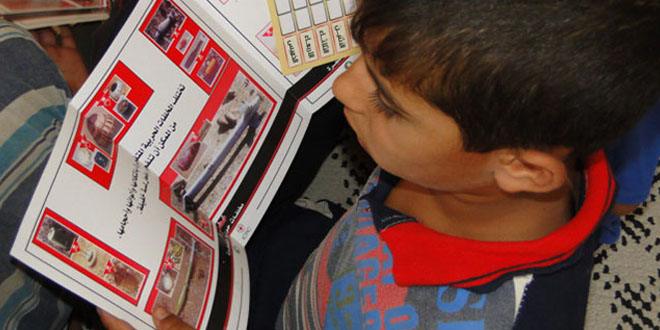 IRCS / Mothanna branch has implemented Explosive Remnant of war Awareness campaigns ( ERWA ) in different areas of Mothanna governorate and they included delivering ERWA lectures and erecting billboards in areas of ( Mishwak , Qushla , and Al- Syeagh ) in Al- Samawa and other districts of Al-Rumatha , Warka’ , and Al- Salman . As well as to that , a number of lectures which identify IRCS and its humanitarian role have been delivered , the number of lectures reached ( 15 ) lecture .Mothanna branch also implements several health and awareness activities like ; awareness campaign on the early detection of breast cancer in several areas of Al-Mothanna to spread awareness from this disease and show the importance of its early detection to women as well as to the percentage of it between men and women , and periodical and self – examination of it . The branch also organizes first aid course to volunteers in Mothanna branch place , the beneficiaries reached ( 15 ) volunteer . There are another courses which have been implemented by the branch like first aid and psychological support course to employees of Al- Samawa electricity station and which included lectures on first aid principles and psychological support as well as to lectures that identifies IRCS and its humanitarian role , the number of beneficiaries reached ( 35) employee . The branch also delivered lectures on psychological support and disasters to doctors of Al- Samawa general hospital , in addition to lectures which identify IRCS and its role .