IRCS : Displace more than 125 families from the district of Tal Afar and Kirkuk to the southern provinces 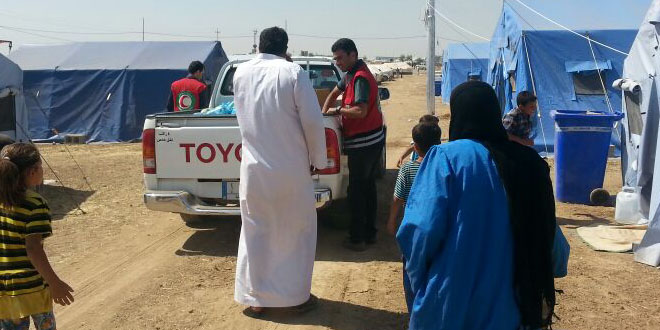 He added “the displacement of more than 40 families from the outskirts of the city of Kirkuk to the province of Diwaniya, as well as displaced more than 25 families from Nineveh province of Wasit”.
Noting that most of the displaced families to the southern provinces now lived with their relative. Alkhozai clarify “the Iraqi Red Crescent Society has distributed more than 3,000 food baskets in Sinjar and Amerli area adjacent to the northern provinces, where the Red Crescent teams were able to enter into those areas that have security issue , despite the difficulties they faced to aid the displaced families in those areas. The Iraqi Red Crescent announced earlier rising to prepare displaced reaching another statistical displaced more than 450 000 displaced people since the beginning of the events so far.